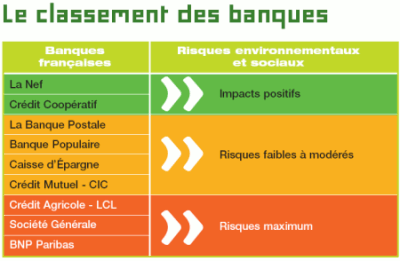 The environment, a criterion of weight to choose your bank. 30 september 2008, By Yann Louvel

Friends of the Earth today release the 2008-2009 version of their eco-citizen guide Environment: how to choose my bank?“, In partnership with the CLCV. The association analyzed the environmental and social impacts of the various activities of the major French banks in order to inform citizens of the use made of the money they entrust to their bank, and to encourage them to modify their practices. The guide reveals in its classification three distinct groups of banks: Nef and Crédit Coopératif with positive impacts, Banque Postale, Banque Populaire, Caisse d'Epargne and Crédit Mutuel-CIC with low to moderate risks, and Crédit Agricole, Société Générale and BNP Paribas, which are the most risky and for which Friends of the Earth are making specific recommendations.

The publication of the guide Environment: how to choose my bank? 2008 / 2009 Comes a year and a half after the first release. Based, among other things, on the expertise of BankTrack, the international network of NGOs working on finance for which the Friends of the Earth are members, the 2008-2009 guide confirms what its predecessor already revealed: too many French banks are involved in controversial projects with heavy social and environmental impacts. Yann Louvel, in charge of Private Finance campaign at Friends of the Earth, summarizes the results obtained: “The large French network banks have extremely diversified activities and professions, with equally disparate impacts. The analyzes that we carried out made it possible to distinguish three very different groups of banks according to the impacts induced by their activities ”.

The riskiest French banks are BNP Paribas, Société Générale and Crédit Agricole. They are among the largest international banks through their corporate and investment banking activities, and each is involved in more than a dozen controversial projects around the world. The guide develops two examples: the Belene nuclear power plant in Bulgaria and the Sakhalin II oil and gas project in Russia. Sébastien Godinot, Campaign Coordinator for Friends of the Earth, explains: “Despite numerous demonstrations and a commitment from the CEO of the group, Baudouin Prot, BNP Paribas is still involved in the dangerous and obsolete Belene project. Likewise, despite an international controversy for several years, BNP Paribas decided to finance the Sakhalin II project last June in defiance of all environmental and social considerations. The environmental impact study of the project was even falsified by Shell, as revealed by The Guardian earlier this month. Previously, Société Générale had already financed Gazprom in the project, to the tune of one billion dollars ”.

Read also:  What is the green economy?

Then there is Banque Postale, Banque Populaire, Caisse d'Epargne and Crédit Mutuel-CIC, whose impact is low to moderate. Some regional mutual funds, or some of their subsidiaries (Natixis especially) are indeed involved in some controversial projects, but their activities are mainly limited to retail banking and French territory. Finally, the activities of the Nef and Crédit Coopératif have positive impacts. Yann Louvel concludes: “La Nef is the only financial institution whose mission is to finance only projects in the environmental, social and cultural fields. In addition, it is also the only one to publish each year the list of projects it finances, with the amount of the loan granted and a description of the activities financed. For all these reasons, Friends of the Earth have been partners of the Nave since 2008, to promote this unique alternative in the financial world ”.

But besides this ranking, the guide " Environment: how to choose my bank "Also presents the operation of French banks and presents consumer-citizens with the steps to follow to change banks. Solidarity finance and Socially Responsible Investment (SRI) products are presented, along with the Caisses d'Epargne initiative, which followed a recommendation from the Friends of the Earth, and proposed the labeling of their products. banking to individuals according to three components (security, responsibility and climate). Finally, the guide describes the different solutions for the financing of his ecological home.

Download the guide:Environment: how to choose my bank and discuss about forums: change bank for a more responsible bank