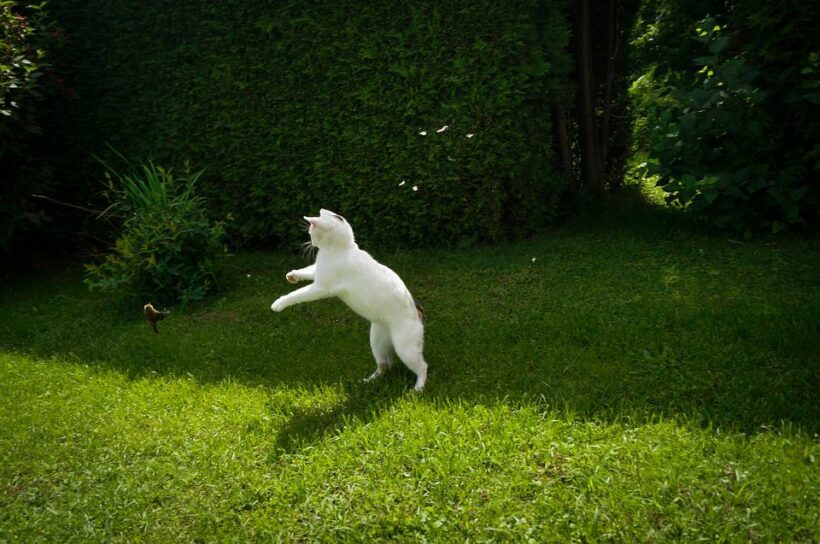 With approximately 14.8 million cats present in our homes in France according to the figures given by the site statista, it is clear that this small domestic feline has conquered the hearts of the French population. Unfortunately, this figure is no longer so rosy if we consider the bird populations that bear the brunt of these predators! Especially since it only takes into account the population of domestic cats, that of stray cats being impossible to estimate. But then how do you prevent your cat from participating in the destruction of species?

The bell necklace or the fake good idea

Of course there is no question of getting rid of your cat on the pretext that it hunts the birds in your garden, or even your neighborhood for the most valiant of them. The first idea that comes to owners to limit the problem is still too often that of putting on a collar with a bell supposed to prevent the bird targeted by your cat.

Although tempting on paper because it can be expensive and easy to set up, this solution is actually a false good idea. Already by its lack of reliability. A large majority of cats remain able to hunt despite this collar. Since the birds targeted as prey are most often the young that have left the nest, their lack of experience does not always allow them to associate noise with danger.

On the other hand, your cat's hearing is very sensitive, much more than that of humans! They can hear sounds up to 50 to 60 Hz where ours is limited to 000 Hz. Imposing constant noise on them with each movement can therefore be very disturbing for them on a daily basis. You would not impose tinnitus on your loved ones “for fun”, the same goes for your cat… Forget the collar, the bell and let's see the solutions that can help concretely!

In France the population of stray cats is very important!! Be careful, we are not talking about real wild cats (Felis Silvestris Silvestris), living in the woods and without any human dependence in the same way as lynxes for example. In our case we will rather speak of feral cats (Felis Silvestris Catus), of the same species as our domestic cats. It is therefore either former domestic cats returned to the "wild life" following abandonment, or cats born outside but resulting from these lines of former domestic cats or from the uncontrolled reproduction of our felines.

These cats, often poorly or malnourished, survive as best they can in our towns and villages. It seems obvious to say that their impact on the populations of birds and wild animals is much greater than that of a domestic cat having a bowl of kibble available. It is therefore this population that must be solved as a priority. Especially since contrary to popular belief, the domestic cat is hardly able to live without humans. These cats are therefore very often thin, parasitized, or even carriers of diseases such as fiv (cat AIDS) and felv (feline leucosis). A picture far from being pleasing…

However, a simple solution exists to overcome this problematic situation: sterilization! That of stray cat populations by associations during sterilization campaigns of course. But also and above all that of your domestic cats.

Advantages and disadvantages of sterilization in cats

The “unnatural” side is one of the arguments that comes up most often to oppose the sterilization of domestic cats. Coupled with the fear of extinction of the species. Rest assured, with 11 cats abandoned at spa last summer, we are very far from it!

Sterilization, on the other hand, has real advantages. In the female, it strongly limits the possibilities for the animal to develop a gynecological cancer (cancer of the uterus, ovaries, or tumors of the mammary chain), or to have metritis (acute inflammation of the uterus very painful for the animal, and requiring emergency sterilization which is often costly). Two types of sterilization are possible, oophorectomy consists in removing only the ovaries, the animal will no longer be able to reproduce, and its risk of gynecological diseases will be lowered but not zero. The ovario-hysterectomy consists in removing the ovaries and the uterus, it therefore eliminates almost all the risks of gynecological diseases for your cat. Although it is a little more expensive, this second solution can therefore be beneficial for the health of your animal. The following video gives an idea of ​​the process of sterilization in cats:

In the male and although it is less well known, castration also makes it possible to limit certain cancers such as that of the prostate. But the most notable benefits here are behavioral. Castration eliminates almost all the smell of urine characteristic of uncastrated cats. In the majority of cases (and all the more so if it was done early), it also removes unwanted marking!! Your cat will then be clean and will use its litter box rather than covering your walls and furniture with jets of urine. Finally, a neutered cat will often be calmer and calmer.

If your cat does not go outside, castration is essential to its well-being!! What could be more unfortunate than an unneutered cat that feels the need to reproduce without ever having the possibility?

If he goes out, castration will not only limit reproduction, but will also limit the size of your cat's territory. Thus it will remain closer to your home which will limit the risk of loss and accidents. Note that in the male cat, castration only takes a few minutes and does not even require wires. You can see this by watching the following video:

The risks associated with the sterilization and castration of the cat are essentially anesthetic. This risk remains minimal, especially since veterinarians are increasingly using gaseous anesthesia during these operations. A sterilized animal will also more easily tend to be overweight, a suitable diet and physical exercise can limit this inconvenience. Finally, in males, urinary problems can occur following castration, however cases are rare and most often linked to poor castration technique. The overall benefit/risk ratio remains largely in favor of sterilization!

For the sake of savings, it may be tempting to resort to the contraceptive pill instead of sterilization. Again, this is a false good idea from all points of view. Indeed, simply forgetting to take a pill can lead to an unwanted pregnancy and reduce your efforts to nothing. On the other hand, and probably the most important point, the feline birth control pill causes serious hormonal disturbances in cats. These disorders usually lead very quickly to the development of breast tumors that can be impressive.

Finally, sterilization solves part of the feline predation by allowing the reduction of the population of stray cats. However, you are probably wondering what to do to prevent your own cat from continuing its extermination of neighborhood birds with impunity. Here again, a very good solution exists: the enclosure! It limits the outdoor space accessible to your cat, thus protecting wild animals, but also your pet. The enclosure will indeed allow your feline to enjoy the outdoors without the risk of having a bad encounter or crossing the path of a car.

In a future article we will discuss the different enclosure solutions possible to protect your pet and the wildlife in your neighborhood, in the meantime you can talk about your favorite animals on the forum.