Press kit and analysis about the BMW TurboSteamer.

Our analyzes at the end of the page. Click on the pictures to enlarge them.

Increased efficiency, more power, reduced fuel consumption: For the first time, the BMW Group's Research and Engineering department recovers engine heat to create power.
15% more efficiency, a liter and a half less consumption for an average car thanks to the principle of the steam car! 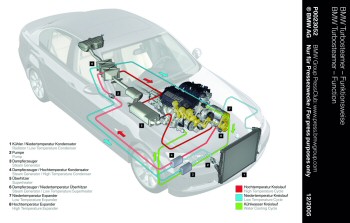 The principle of the TurboSteamer

Thanks to a new concept, the BMW Group's researchers have succeeded in taming the largest - and never-used - source of energy present in a car: heat. By marrying a power steering device with a BMW 1.8 l four-cylinder engine on a test bench, the engineers were able to reduce the consumption of this mechanism by 15% while generating a power of 10 kW and a torque of 20 Nm additional. Increased power and efficiency from nowhere! And who do not cost a drop of fuel! Indeed, this energy comes exclusively from "calories" that normally get lost in the exhaust and the coolant. Such a research project therefore meets all the criteria of the BMW Efficient Dynamics philosophy: reduced emissions and consumption as well as increased dynamism and performance. 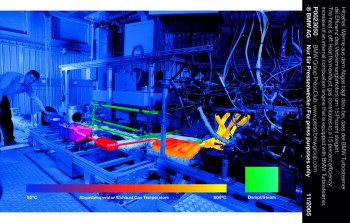 Up to 15% more efficiency for the gasoline engine

The Turbosteamer - the name of the project - is based on the principle of the steam engine: a fluid is heated to form steam in two circuits and this steam is used to operate the engine. The first energy supplier is a high temperature circuit using the very hot exhaust gases of the internal combustion engine via heat exchangers. More than 80% of the "calorific" energy contained in the exhaust gases is recovered by this technique. The steam is then directly led to an expansion unit connected to the crankshaft of the internal combustion engine. Most of the residual heat is absorbed by the cooling system, which is the Turbosteamer's second energy supplier. This new engine control system really increases the efficiency of the entire 15% mechanical assembly. "The Turbosteamer further persuades us that the internal combustion engine is undoubtedly a solution for the future," explains Professor Burkhard Göschel, Member of the Management Board in charge of Development and Purchasing at BMW AG. 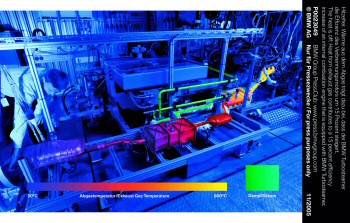 A system for today's cars

This engine control system is in its phase of extensive testing on test bench. All of its components have been designed to be installed on current models of the brand. Thus, tests have been carried out with different packages to ensure that a BMW 3 Series, for example, can accommodate it without major changes. Mission accomplished: The engine compartment of a four-cylinder model offers enough space to integrate all Turbosteamer modules.

It is now a question of simplifying and reducing the size of the system as a whole. The stakes are high since it is a matter of mass industrializing this innovative system within ten years.

The Research and Engineering Department of the BMW Group has just nicely illustrated the medium-term prospects offered by the BMW Efficient Dynamics philosophy. "This project aims to resolve the apparent contradiction between the reduction of emissions and consumption on the one hand and the performance and agility pair on the other hand," summarizes Professor Burkhard Göschel. For the BMW Group, a fundamental principle is that a reduction in consumption - even measured - affecting the entire range produces more effects than a reduction more marked on a niche model. That's why BMW intends to focus on a specific task: making the most modern technologies to reduce the consumption of cars accessible to as many people as possible.

When we know that more than 40% of the thermal energy consumed in an engine is lost in the exhaust, we welcome this technological initiative which, if it is developed and distributed at an affordable cost, could greatly contribute to the economy of petroleum resources.

However, contrary to what is specified by BMW, the idea is not new since the concept had been developed by the Kitson Still, Diesel-Steam Locomotive in the 1920's. Click here for more details

We currently see some limitations to this system:

When we know that the price of steam microturbines for domestic use is around € 20 for 000 kW. It is to be feared that this point is difficult to solve, especially when the directors are talking about equipping the whole range (an additional cost of the car exceeding 10% ​​is not commercially possible)

Indeed; high pressure injection diesel turbos are already pumping a lot of energy and the temperature of their exhaust gases is probably too low to be usable by this process. This is a shame when we know that it is the direct injection diesel which currently offers the best engine efficiency.

Indeed; already fitted on certain industrial engines or trucks, it is much easier to implement and provides a reduction of 5% to 10% but has the same limits of use: a high exhaust temperature therefore efficiency limited to the upper range powers and accelerations. (see next note)

… Ie at high engine power (vehicle speed) or high torque demand (strong acceleration). Consequently, we can doubt the efficiency of the system in urban journeys (2/3 of the km carried out during the life of a car) and therefore that in the city the system makes a significant difference. On the contrary, his overweight risks increasing consumption ...

So what interest to gain 15% in consumption if this gain is only possible beyond a certain power (undoubtedly high, from 50% of the maximum power of the vehicle) especially knowing the power ranges (high) BMW vehicles?

Unless, of course, the BMW engineers thought of temporarily storing the steam (in a buffer tank under high pressure and temperature) to use it during the highest torque demands. In this case, this last remark would be false ...

At the moment when engine technology is advancing, all the same, quite quickly, 10 years is a rather long term. At this date, 2015-16, therefore, what will be the very promising technology of Diesel Hybrids? There is a good chance that econologically this last technology is more powerful although the TurboSteamer could obviously adapt on the Hybdrides… essences.

If the principle is not as innovative as BMW would like us to believe, its diffusion would make it possible to make a leap forward on the efficiency, still low of current gasoline engines ... But at what cost: as much technological (complexity of management and increased vehicle mass…) than financial (repercussion on the final price of the vehicle…)? The Kitson Still's commercial failure was, at least in part, due to its complexity ... Will the current price and in 10 years of energy make such a technology profitable for individuals? The future will tell…

Finally, we think, perhaps wrongly, that the system could have a bright future on industrial engines. Indeed, these engines being more often and for long periods heavily loaded, the limits of use and costs mentioned above would no longer be necessary.