The fermentation oil can be produced anywhere. Extract from an article taken from Science et Vie of… 1949.

In Tunis, Dr. Jean Laigret has just obtained petroleum by the action of a ferment, the bacillus "perfringens" on the most diverse organic matter. This discovery which elucidates the problem of the formation of natural petroleum can cause an economic revolution. It brings new prestige to the Institut Pasteur in Tunis, whose director, Charles Nicolle (1866-1936), received the Nobel Prize for medicine in 1928. 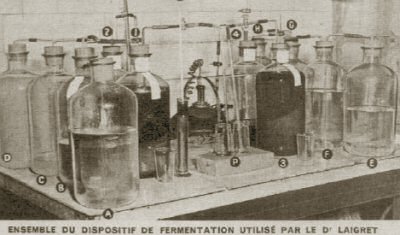 In 1943, at the Agronomic Institute of Algiers, two engineers, MM. Ducellier and Ismann, strive to develop a process for producing "farm gas" or methane obtained by fermentation of manure. “Methane” is one of the names of husbands gas. In the laboratory, it is obtained fairly easily; but when they operate on large quantities and using waste, Algerian technicians find that their production is constantly interrupted or hampered by incidents of which they cannot disentangle the cause. At the same time, Dr Laigret was professor of bacteriology at the Factulté de Médecine d'Alger. Born in Blois in 1893, he studied at the Naval Health School in Bordeaux and, after a stay at the Pasteur institutes in Brazzaville and Saigon, made his mark in Dakar for research on yellow fever. Charles Nicolle called him to Tnus to help him in the work which was to lead to the development of the yellow fever vaccine.

The government asked him to study the behavior of various bacteria involved in the formation of manure gas. He soon became convinced that the production of this gas could only be improved at the stage of industrial exploitation.

But he was thus led to observe the action of one of the most common anaerobic bacilli in nature, the bacillus perfringens. Anaerobic bacilli are microorganisms capable of living in an environment deprived of oxygen. Perfringens already has a certain notoriety: it is indeed one of the most important microbes of the gas grangrene; on the other hand, its action as a ferment destroying organic matter at the expense of which it produces carbon dioxide and hydrogen is well known. Nevertheless, all this is nothing compared to the role that Dr. Laigret will discover in him after several years of research ...

Read the rest and end of the article: synthetic oil by Dr. Laigret