Arriving between April and early May, the swallows made their return to Europe this year, but for how long? These small birds, weighing only 20 grams, are nevertheless important in terms of biodiversity. They are valuable allies in the fight against mosquitoes which increasingly can be carriers of vector-borne diseases. But their populations are decreasing year by year, so how can we help them? We will try to give you some leads with this article.

How to recognize them?

To be able to help them, you must first know how to identify them!! In Europe, there are 5 different species of swallows. The two most common being the barn swallow and the house swallow. The first is easily recognizable by its bluish color as well as the red spot on its head and under its beak. Its tail has two long feathers called rectrices which give it a more indented appearance than that of other European species. In flight you can also easily see the fairly characteristic white spots that dot the feathers of its tail. 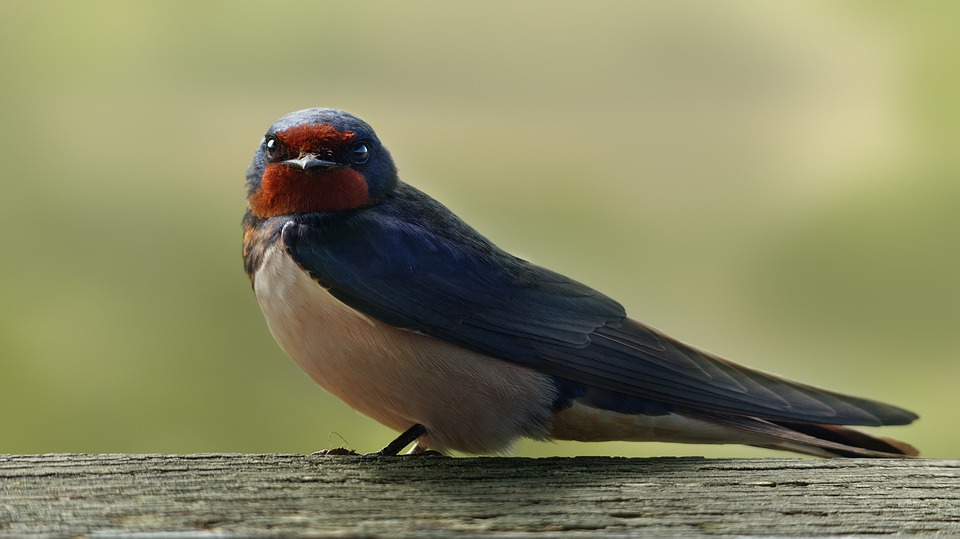 If the house swallow also has a bluish body part, it is the white color of its throat and belly that allows it to be identified. It is more likely to be found in town, while the barn swallow more easily colonizes agricultural buildings. However, it is possible to encounter barn swallows in urban areas and vice versa. 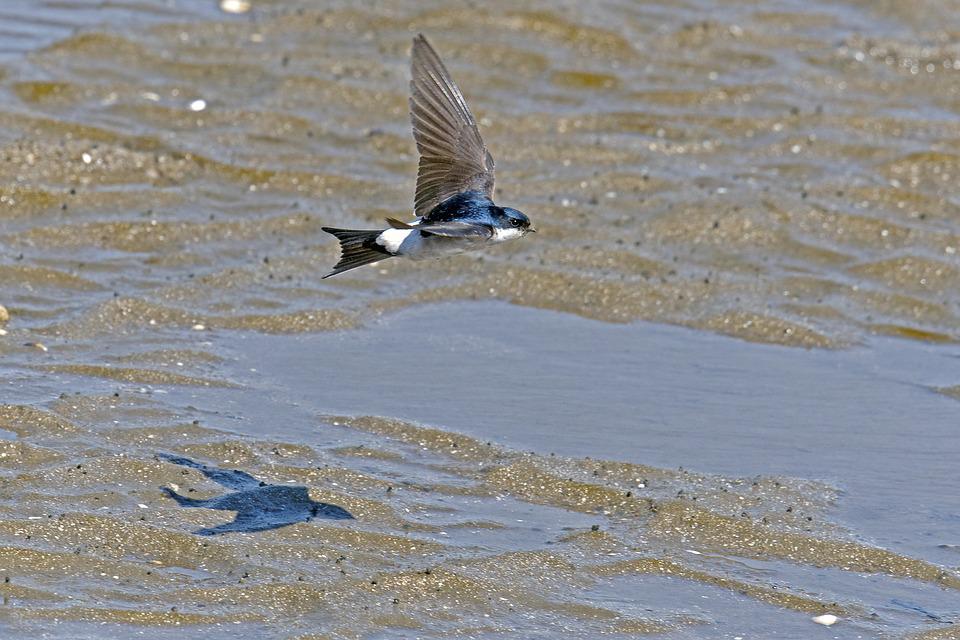 We can also mention the bank swallow which nests in “burrows” dug in the loose cliffs, the rock swallow and the red-rumped swallow. These three species are very rare in Europe. In France these five species are protected!! Destroying their nests can lead to heavy fines ranging from 1000 to more than 12000 euros depending on the status of occupation of the nest, and the destruction or not of its occupants.

Swallows do not spend the winter in Europe, they go on migration between late August and mid-September to go to Africa. They then return to occupy their nests the following spring. Swallows are very loyal, they come back to the same place every year. This will make it easier for you to help them if they already occupy your land or your home. Or at least if there are colonies of swallows in your town or village. However, the installation of suitable nests sometimes brings nice surprises. 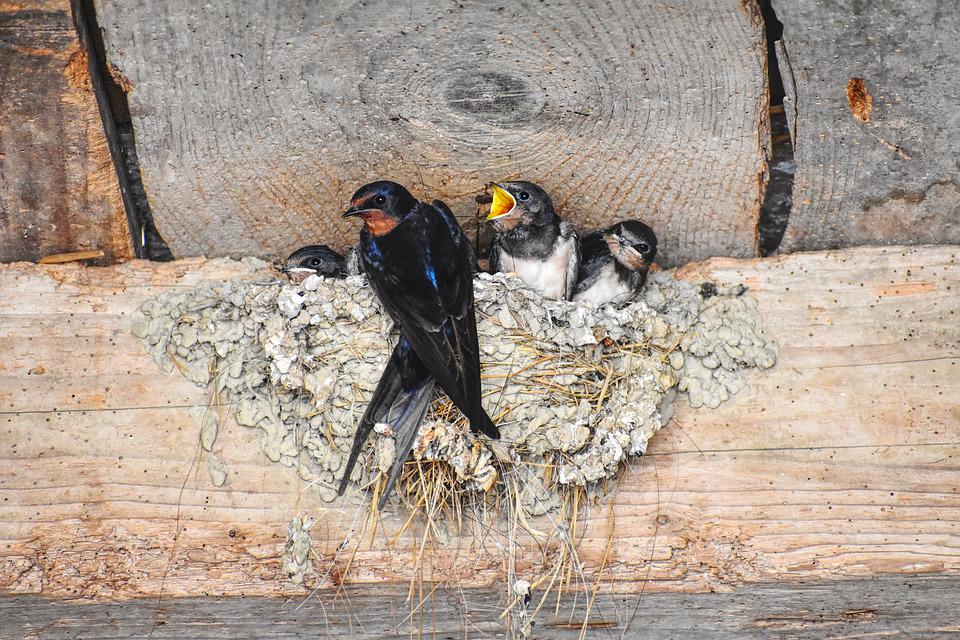 Declining swallow populations, global warming and ecology are closely linked. Indeed, the causes of their disappearance lead to major ecological concerns. For example, we find the use of pesticides which is directly responsible for the depletion of insects which are the main food source of swallows. Pesticides also impact human health.

The multiplication of building materials that are smooth and devoid of hooking possibilities (such as glass and steel, for example) also limits the installation of swallow populations. It may be interesting to turn instead to natural materials which will also promote theisolation from your home.

On the other hand, swallows are a powerful natural “insecticide”. Included in a project permaculture, they will allow you, in the same way as ladybugs, to get rid of some of the harmful insects in your garden (mainly mosquitoes, flies and speckles). A cohabitation that can therefore be interesting for humans as well.

But then how to help them?

As we have seen previously, destroying their nests is strictly prohibited. But it is on the other hand possible to leave mud available to the swallows so that they can build their habitat. It is also possible to install them nests already made and ready to be used. Indeed, making a nest requires a lot of energy from the swallow, it will be easier for it to restore or improve a nest that you have made available to it. You can find nests for sale easily on the internet, but if you are a handyman and you have a little time in front of you, it is also possible to make it yourself. The following video explains how:

However, it is not possible to feed the swallows. Indeed, they feed on insects hunted in full flight. However, it is possible to help them by banishing pesticides and insecticides from your garden. The opportunity to take an interest in the concept of kitchen garden lazy. On the other hand, you can also sow or plant insect-attracting seeds and shrubs in your garden. This is the case, for example, of the mixtures of wild flower seeds or the butterfly tree (real name Buddleia Davidii).

Do not forget that the swallow is a rather fearful bird. Avoid as much as possible loud noise pollution near their nests during their period of occupation. In case of work on your facade, you will have to wait until the fall for their realization. If the nests have to be moved, you will need to obtain the agreement of the DREAL (Regional Directorate for the Environment, Planning and Housing) on ​​which you depend. The nests will then have to be replaced as they were before the work. But also remember to be discreet in your observations to avoid disturbing the feeding of the little ones. The birds will not necessarily appreciate being watched constantly, or being subjected to the cries of children, barking or untimely closing of shutters near the nest.

Very often, it is the droppings of swallows that cause concern. Know that you can greatly reduce the nuisance by installing a small board located 40 cm below the nest. Then all you have to do is clean up that clipboard after your feathered roommates leave each fall. Be careful, however, that your installation does not favor the predation by cats. The following video takes pictures of these few ways to live peacefully with swallows!

Finally, it can also happen that you find an injured swallow, or a young fallen from the nest. The swallow being a protected bird, it is normally forbidden for you to capture it, move it, and keep it in your home. Of course, if the bird you have just found is in immediate danger of predation, the best thing is to pick it up and place it in a closed cardboard box, with ventilation holes, the time to alert a protection. On the other hand, if no immediate danger threatens the bird, it must then be left on the spot and start by contacting a protection center which will give the procedure to follow. In France, the main interlocutor remains the LPO: League for the Protection of Birds, they are the ones who should be contacted first.

Swallows are regularly confused with another bird, also protected: the black swift. It is recognized by its gray color. The swift has the same problems as the swallow: scarcity of prey, nesting difficulties... It is essential to ensure its preservation. The cohabitation between colonies of swallows and swifts is generally not a concern. The following video allows you to dive into the heart of a Swiss colony of black swifts

In France each year, counting operations take place for endangered species such as swallows and swifts. Thus, for example, in Normandy, an investigation by the LPO which had been started last year is renewed in 2022. Sometimes it is also the town halls that offer activities in favor of the bird populations of their municipality. This is the case of the town hall of Périgueux which has posted on his website, an action plan for this year. Does your municipality also offer this type of activity? Come talk about it on our forum on ecology !

If nothing exists in your municipality, then this may be the opportunity to launch your own action? This can be an awareness-raising action with the inhabitants of your city or village, or even with your town hall. It is also possible to act at home, to make your own land a LPO shelter. Good to know: this initiative is not reserved for individuals, it can be set up by a school, or even by a company concerned with bringing biodiversity into its activities.