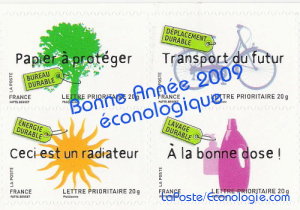 Considering the context, I would have a hard time wishing you a hypocrite "prosperous and happy new year 2009", as we must have already wished you, anyway, dozens of times ...

Barack Obama said yesterday in his inauguration speech: the economic situation is dire (without being catastrophic) and the decline of the American Empire, and consequently that of the Western world at least as our parents knew it ( + 3% annual growth) is in everyone's mind ...

The year 2009 will probably not be “good” for most of us: “economic crisis” obliges… But in the end what does “good” mean precisely? It's very subjective, but I think for most Westerners the word "happy new year" can be summed up as "good year of consumption", and to use a well-known phrase: “Don't we want to work more to earn more… to consume more? "

For 2009, Econologie.com wishes Humanity more frankness and respect, more sharing and solidarity, more morality and honesty, less media intoxication and more reflection ... and of course health (well more important than a bank account) and courage for those whose year will be hard or even catastrophic because of a handful of men ...

Read also:  Do you Portail-Environnement.com?

Men who believed that making money with money was healthy and sustainable,
Men who think that infinite growth in a finite world was possible,
Men who speculate on essential food stuffs,
Men who receive annual bonuses that are so large that 100 employees in a lifetime could not save it,
Men who have forgotten that it is the real industry that runs the virtual stock market and not the other way around,
Men who are never responsible or guilty of anything,

To those there I simply wish that they become aware of their immorality of "always more" but especially of the contempt they have for Humanity.

But these men, I also thank them for showing the flaws and limitations of the current system.

Is the period therefore ripe for thinking about a more moral, more human and more sustainable system? Or on the contrary an extremely dark period socially and ecologically is announced? Probably a bit of both ...

Wouldn't 2009 therefore be a favorable year for the trivialization of econology?in its broadest definition and at least in the minds?
And this to replace the society of overconsumption and over-indebtedness in which we are?

I hope so on behalf of all econologists.

We are not the only ones who think, since influential people like Gegard Mermet, also evoke this idea of ​​evolution of the system.

By tradition, here is our "greeting card" based on a set of Swiss Post stamps DD.

Soon an 2008 report of Econologie.com will be drawn up, you can already participate to say what you have retained in 2008 forums and the site?

Links related to these wishes
- Gegard Mermet also evokes this idea of ​​evolution of the system
- 2008 review of the Econologie.com website
- 2009 greeting card idea
- The topic of Voeux 2009