Fuel oil from algae: big industrial development in the United States. by David Lefebvre, journalist in the press group of France-Agricole.

The national press has just echoed research projects in France to develop fuel oil from algae that recycle carbon waste such as CO2. But countries like the United States are already at the stage of industrial development.

While in France, research is beginning to focus on the manufacture of fuel oil from algae, Israel and the United States are already at the stage of industrial development of this process.
All French agricultural areas would not be sufficient to produce enough fuel oil to meet the needs of the country. For example, 118% of UAA in rapeseed should be grown to replace fuels, according to some experts, since rapeseed produces only roughly 1 000 liters of oil per hectare.

Since the 50 years, the University of Massachusetts Institute of Technology has been working on the issue. And since 2004, she has incubated Greenfuel, a company that offers bioreactors in which the algae solution can hold up to 80% of its weight in oil, which then serves as fuel after refining. Placed in a nutrient-deficient medium, the seaweed starts producing triglycerides (oil base) rather than sugars. Carbon dioxide is the main source of nutrition. According to Greenfuel's manufacturers, one hectare of algae could produce 30 at 120 times more oil than one hectare of rapeseed or sunflower.

A 1 m300 seaweed panel project is under construction. And $ 2 million in capital was built up to start the business. The only constraints are a significant source of CO18 (a roof ...) such as factory smoke, sun and water which can be sea water.

The bioreactors invented by Isaac Berzin, a researcher for Greenfuel, consist of transparent tubes that contain the algae in which carbon dioxide gas or any other carbon waste is bubbled, such as fumes from coal or gas power plants.

Its technique makes it possible, in sunny weather, to recycle up to 82% of the CO2 contained in the flue gases of the plants. On cloudy days, the recycling yield drops to 50%. But the Berzin technique also makes it possible to recycle 86% of NOx (nitrogen oxides which are also very impacting on the greenhouse effect). The algae have a capacity for rapid growth, which explains the potential for increased oil production compared to oilseed crops.

Already, many countries are using Greenfuel technology. The South African company De Beers Fuel Limited of South Africa has just ordered Greenfuel 90 reactors to convert CO2 into biodiesel. In Germany, the E-On group is also working on a project to recover the CO2 from the Rhur thermal power stations. But Greenhouse Gas Mitigation, the project in question, is still in the research stage. We should also mention the technological progress of the Israelis in the algae farms, with the company Algatech, installed in the Negev desert.

In France, Shamash, the research project on fuel algae brings together eight French teams and companies for a total budget of 2,8 million euros.

25% of US transportation fuel

Will algae panels be part of our landscape soon? And are they already announcing the end of agricultural biodiesel produced with sunflower, soybean or rapeseed? According to Greenfuel researchers, in the current state of the art 20 000 km2 panel technology would be required to meet US fuel consumption. A considerable area that suggests that biofuels have a bright future ahead of them. But, they objectively estimate that 25% of the fuel used in transport could be replaced by seaweed oil. As for the production costs, the Americans announce a profitability from a price of the barrel of 19 to 57 dollars. Individual solar panels are also being studied for farmers.

In France, the development of fuel vegetable oil has to face many tax and regulatory objections sought by the legislator despite the aspirations of farmers. And technical advances in oil engines come from Germany with companies like ATG or Ferrotherm. Access for farmers to the vegetable oil fuel market would have made it possible to prepare oil engine technologies. If seaweed oil replaced a quarter of fossil fuels, as is expected in the United States, France would lag behind a very significant technological gap.

2) Greenfuel solar panels are already sold in Spain and South Africa. Huge industrial projects are under study in the United States.

3) On a sunny day, algae convert about 90% of carbon dioxide from factory fumes into oil. 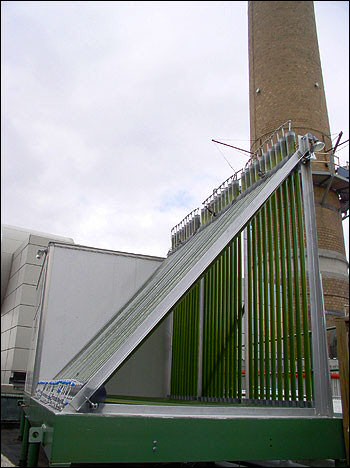