A combined gas and diesel engine that respects the environment: a technological marvel

The impressive American truck attracts attention. With its characteristic shapes and chrome steel, it does not go unnoticed on Swiss roads. But the Kenworth's strengths are not limited to appearance, they are also technological: the engine combines conventional diesel technology with a gas drive, more respectful of the environment. 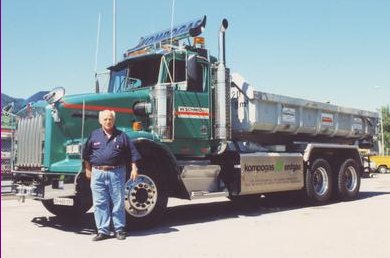 Mr. Josef Wespe has converted an American truck for the Schmid Kompogas AG company: 80% of this truck runs on biogas - the remaining needs are met by diesel. (CH-Forschung)

“An American model is ideal for us, who like to attract attention by showing that we drive with environmentally friendly energy,” explains Walter Schmid of Kompogas AG in Glattbrugg.

The Kenworth truck is equipped with a Caterpillar engine with a power of 414 hp and operates on a choice of two fuels: diesel, gas or a mixture of the two. Diesel is mainly used to heat the engine; when running at full throttle, the proportion of gas is 90%, whereas it is 80% on average. The proportion of gas is constantly adapted to the power requirements of the engine. The tank consists of eight steel gas cylinders with a total capacity of 950 liters (150 kilos of gas). When the gas reserves are exhausted, the engine automatically switches to diesel.

About 3 years ago, Mr. Walter Schmid became interested in Dual-Fuel technology, which was then widely used in the United States. His dream of a “bivalent American model” came true thanks to the importer of commercial vehicles, Mr. Josef Wespe of Altstätten. He imported the Kenworth and incorporated a bivalent engine authorized in Switzerland. “The acceptance process was tedious and lasted almost a year,” says Wespe.

But patience has borne fruit: Dual-Fuel now meets the requirements of European type expertise. Mr. Josef Wespe, also known as Mr. Diesel, developed the bivalent drive mechanism in collaboration with engineers and suppliers from the USA and Canada. The project received financial support from the Swiss Gas Industry Research Fund.

The Schmid AG company, active in the construction sector, also operates plants in Kompogas, which, from the appropriate reprocessing of household and garden waste, produce biogas which can be used as fuel, like natural gas.

Read also:  Auto insurance: how to get emergency insurance?

This truck is therefore propelled by the vegetable waste that it collects itself. 250 kilos of biological waste allow him to travel 100 kilometers. One advantage of this fuel: it is CO2 neutral. "Vehicles running on Kompogas do not release more carbon dioxide into the environment than if this waste were composted," confirms Mr. Schmid. Regarding the other emissions, this truck has a good record: it emits 92% less nitrogen oxides and 76% less carbon monoxide than prescribed by the new Euro 3 standard for heavy-duty diesel vehicles. Hydrocarbon emissions are even 97% and particles 87% below this limit value.

Converting a diesel engine to a Dual-Fuel engine costs 105 francs (around 000 euros) but savings are then made in fuel costs: compared to diesel, natural gas saves 60 francs ( 000 euros) for 3 kilometers.

Since Kompogas is exempt from the tax on mineral oils, this natural fuel is even cheaper than natural gas: its price is 40% lower than that of gasoline or diesel. "Our truck is depreciated after having driven 250 kilometers" calculated Mr. Schmid. This experience is so conclusive that the company has planned to purchase a second vehicle of this type. The Mc Donalds chain has also ordered such an environmentally friendly truck.

In the meantime, Mr. Josef Wespe has already embarked on a new project: together with a friend, who runs a coffee plantation, he is planning a facility in Kompogas in Guatemala to use the large quantities of vegetable waste from the production of coffee. And maybe we will soon see a Dual-Fuel truck driving Kompogas on the roads of Guatemala ...